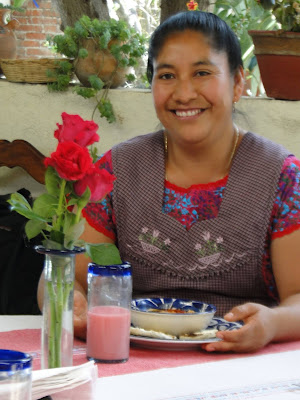 $85 USD (8 students max) includes transportation to and from the Jardín Etnobotánico de Oaxaca (Ethnobotanic Garden), which is centrally located in downtown Oaxaca. All classes take place from 9:00 a.m. to 3:00 p.m. Space is limited, so make a reservation today!

See what people have to say about El Sabor Zapoteco on Trip Advisor! 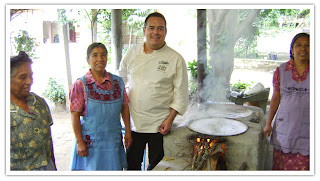 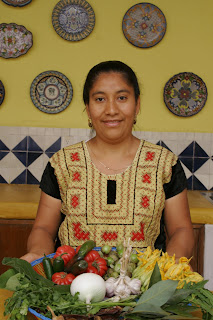 Set in the foothills of the Sierra Juarez mountains, 31 km from the city of Oaxaca, lies the ancient Zapotec village of Teotitlan del Valle. Renowned for its textiles, Teotitlan also boasts a rich culinary heritage steeped in culture, indigenous ingredients and artisanal techniques.

Its reputation has earned it a must-see for tourists from around the world, and Reyna Mendoza of El Sabor Zapoteco offers participants a hands-on experience into this amazing culture.

Like most women of her village, Reyna began making tortillas and learning how to toast chilis and grind ingredients on a metate at an early age.
In 2001, Reyna became an integral part in the project Que Tamal, a tamale cooperative started by La Mano Magica, that made and served the various kinds of tamales from Teotitlan del Valle. Shortly thereafter, she headed up the kitchen at the bed and breakfast La Casa Sagrada and began teaching cooking classes.
Casa Sagrada attracts many important culinary events, and Reyna's expertise was repeatedly called upon for Marilyn Tausend's Culinary Adventures, and collaborated with chefs Roberto Santibañez and Top Chef Master Rick Bayless of Chicago's Frontera Grill, Topolobampo and Xoco.

She further honed her skills alongside author and chef Ricardo Muñoz at his Mexico City restaurant Café Azul y Oro, and in 2005 broadened her culinary horizons in Canada, learning English while catering private dinners and teaching cooking classes. She is honored to be a part of the upcoming 2010 International Gastronomy Congress in Mexico City, invited by Congreso Gastronómico Internacional , where she will demonstrate how to make chocolate atole.